What does a multiswitch do?

A multiswitch is a device used with a dual or quad LNB to distribute satellite TV signals from an antenna and LNB to multiple (usually more than four) receivers.

Multiswitches are very unfamiliar to the general public, but they are familiar to satellite TV installers or service integrators. These devices allow people to simply set up a satellite dish or a system of satellite dishes on the roof so that all rooms in the building can share all the satellite TV signals received by the dish, and each room can watch TV without interfering with each other. Some of you may ask, “I don’t have much money to have several houses, I only have a house with 3 rooms, will this switch allow me to buy just one satellite dish so that I can watch TV in all three rooms at the same time? The answer is yes, it is as simple as buying and installing the corresponding satellite multiswitch according to your needs.

Today we will take a simple die-cast body switch CM24Z as an example to see how to install this multiswitch system.

1. Find a suitable location on the roof to set up the satellite dish according to the longitude position of the corresponding satellite in the sky. Install the LNB and connect the coaxial cable. Then use the satellite finder to help you find the exact location to receive a clear satellite TV signal.

3. Plug the coaxial cable port that extends into the room into the satellite TV receiver and debug it. You’re ready to watch TV!

Isn’t it very simple to install the multiswitch system? Of course, for aesthetic reasons, it is best to have these wiring concealed and wired in advance.

What is Satellite Television? & How does it Work? 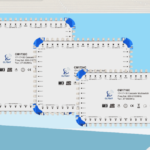